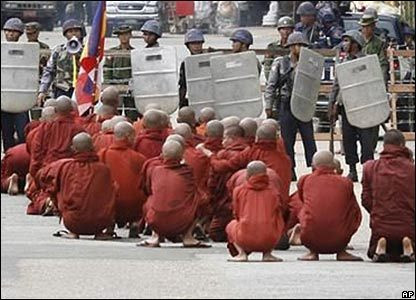 The delegation of prominent international personalities is trying to use their influence at a crucial time, with peace talks due to start in Libya and a U.N-African Union peacekeeping force to begin deploying later this month.

The visit also comes days after a stunning attack in which rebels overran an African peacekeepers base in northern Darfur, killing 10 — the deadliest attack on the force since it arrived in the region three years ago.

"We are not here on a sightseeing tour. We hope we can do something that will make a significant difference ... and bring peace," Tutu, who won the Nobel Peace Prize in 1984 for his fight against apartheid in South Africa, told reporters after the delegation arrived in El Fasher, the capital of North Darfur province.

Earlier, the North Darfur governor, Youssouf Kabir, told the delegation the security situation in the province is "stable and good."

Government forces have been waging a fierce offensive against rebels in North Darfur for the past two weeks.

On Saturday night, amid the fighting, a force of 1,000 rebels overran a base of U.N. peacekeepers at Haskanita in North Darfur. In a battle that lasted into the early hours Sunday, the rebels killed 10 peacekeepers, looted the base then escaped when Sudanese troops moved in.

The largely symbolic visit by the delegation led by Carter and Tutu is intended to push all sides to make peace in Darfur, where more than 200,000 people have been killed and 2.5 million driven out of their homes in four years of violence.

The group visited a U.N. aid compound located next to the sprawling Abu-Shok and Es-Sallam camps where 150,000 refugees who fled Darfur's violence are living.

"We hope that you can contribute to put an end to this crazy way," said a nazer, a traditional leader among about 30 men and women who came from the refugee camps to meet the delegation.

"We certainly hope that everybody will continue to talk to each other, including the rebels," Carter told a group of Darfur civil society workers.

The surprise attack on the peacekeepers has raised worries over the planned deployment of a 26,000-strong U.N.-AU peacekeeping force. Two top expected contributors to the force, Nigeria and Senegal, expressed second thoughts on Monday.

The Nigerian ambassador to the African Union, Obioma Oparah, tried to dispel fears the weekend deaths of peacekeepers would discourage African governments from contributing troops to the joint force. Sudan has insisted that the bulk of the new force be African.

"No doubt about it, we are deeply saddened by the situation and we condemn the attack on the soldiers," said Oparah, whose country lost the greatest number of troops. But, he said, "We are determined to forge ahead. We are committed."

The Haskanita attack "shows how important it is to have a very robust force and a very mobile force — because this tragedy would not have happened if the African Union had the capacity to quickly reinforce this threatened position," Undersecretary-General for Peacekeeping Jean-Marie Guehenno said after briefing an emergency meeting of the Security Council on Monday.

"So I hope this tragedy really strengthens the hand of all those who see the importance of having very quickly a very strong force," he said.

The hybrid force is planned to replace the 7,000-member African Union mission that has struggled since it began, too understaffed and underequipped to ensure peace in the vast desert region of western Sudan. Violence has only increased. Some rebels resent the peacekeepers, accusing them of doing little to protect refugees.

Darfur is scene of the world's largest humanitarian effort, trying to feed those hit by the turmoil. The conflict pits the Sudanese military against ethnic African rebels who rose up against discrimination by the Arab-dominated government. To help put down the rebellion, Khartoum is accused of unleashing Arab janjaweed militias who have burned hundreds of ethnic African villages, killing and raping civilians.

On a minor note, my untitled 28 (genocide) fell off the wall these paintings are painted around the side making this a studio disaster but compared to the above doesn't mean much.
It seemed the painting wanted some more attention.