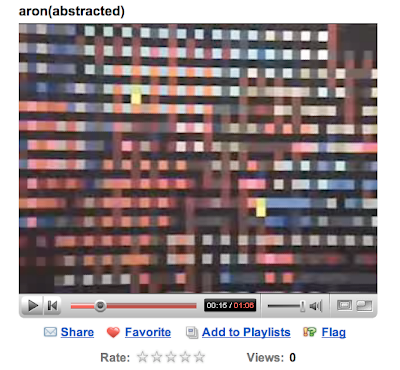 This is an under 1 minute video that Adam Simon made at my show "Non-linear Collateral Damage" at vertexList in Brooklyn. He showed it thus far at the one minute film festival in Narrowsburg, New York that is organized by his brother Jason Simon and Moyra Davey. It features me talking about a representation in my paintings that upon watching the video seems to be only in my imagination. This Bit-mapping and super-imposition of multiple images exists, the content is erotic and horrific and is not just mumbo jumbo and gesturing apparent on the surface of the screen. This is abstract horror in the 4th degree. That the source material came from the web was turned to paint, then video taped, edited, and then reformatted and put back on the web on utube makes for a logical journey.
Posted by a at 3:29 PM