by Erika Knerr
December 14, 2008: I arrived at the gallery and spoke with Marcin Ramocki, the founder of the gallery while waiting for Aron to arrive.

Erika Knerr: Is this the old Four Walls Space?

Marcin Ramocki: Yes, it was Four Walls until 1999, (founded by: Adam Simon) then Leo Koenig’s first space in 1999, then Mike Ballou’s Film and Slide Club, then Vertex List since 2003. I did five years and I just passed the space on to a friend of mine, Charles Beronio, who’s going to do the next five years.
more:interview:http://www.artistorganizedart.org/commons/2009_01_01_artistorganizedart_archive.html
The show is open regular galler hours through Feb. 1st. and has been extended till Feb. 28th. by appointment only call me or Charles also, Marcin's documentary on Williamsburg is opening at The Museum of Modern Art Feb.25th. 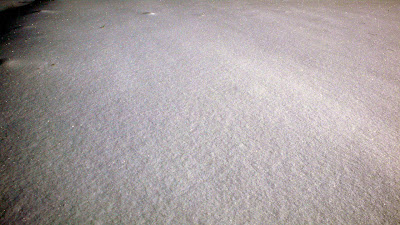 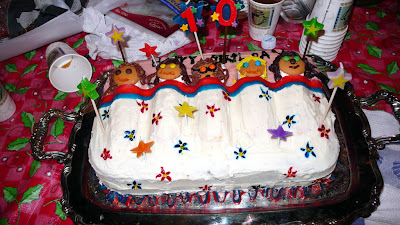 Maker: Nancy Horowitz "SLEEPOVER CAKE"
Posted by a at 7:54 AM No comments:

Email ThisBlogThis!Share to TwitterShare to FacebookShare to Pinterest
Labels: not art

Made in U.S.A. at Film Forum 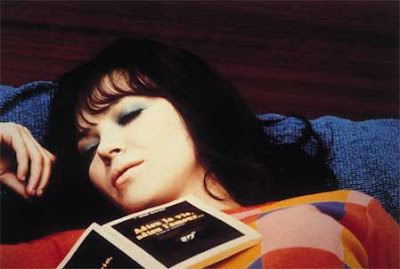 (1966) “Walt Disney with blood.” Trench-coated Anna Karina arrives in Atlantic City (apparently a provincial French town) to track down boyfriend Richard P… (phone, plane or car noise constantly blots out the last name), only to find... And then the bodies start dropping, amid encounters with the mysterious, height-challenged M. Typhus, his nephew David Goodis (a character, not the Shoot the Piano Player author), Goodis’s singing Japanese girlfriend Doris Mizoguchi, characters named “Richard Nixon” and “Robert McNamara,” while being shadowed by Jean-Pierre Léaud and László Szabó’s “Paul Widmark,” with a break for a Hegelian bull session in a bar, punctuated with the real Marianne Faithfull warbling “As Tears Go By.” Made as a favor to his cash-strapped producer Georges de Beauregard, and filmed simultaneously with Two or Three Things I Know About Her, this ostensible adaptation of a story by American crime writer Donald Westlake was Godard’s farewell to his muse/ex-wife Karina, never filmed more glamorously, as she changes from one colorfully Mod ensemble to another, posed against starkly colored backgrounds and shot (by New Wave legend Raoul Coutard) in a succession of giant, haunting close-ups. But it’s simultaneously an extremely metaphorical and narratively disjunctive treatment of the notorious disappearance/murder — still unsolved — of exiled Moroccan leftist Mehdi Ben Barka and Godard’s own way of suggesting a vast Cold War conspiracy. Dedicated to “Nick [Ray] and Samuel [Fuller], who taught me about image and sound” and virtually unseen in this country due to rights issues, this is Made in U.S.A.’s very first U.S. release in 35mm. “The many shots of Anna Karina, with their wide variety of mood — each a different pose, angle, expression — serve as a catalogue of remembrances. The close-ups are the most expressive ones in color that Godard has made to date.” – Richard Brody. Color; Approx. 90 minutes
1:00, 2:50, 4:40, 6:30, 8:20, 10:..
View the trailer
GLOSSARY OF LITERARY & CINEMATIC REFERENCES
Jonathan Rosenbaum's review (following a rare 1981 screening of a 16mm print) [pdf file]
Glenn Kenny's interview with Made in U.S.A. star László Szabó on The Auteurs
Interview magazine article on Made in U.S.A. (and source material author Donald Westlake)
Green Cine Daily's podcast on Made in U.S.A., featuring Armond White
The Auteurs: "Notes on Made in U.S.A."
Godard on Made in U.S.A. (1966 Interview) [pdf file]
Biographies of Godard, cast & crew [pdf file]
Immediate Impressions of Made in U.S.A. from The House Next Door
IFC Daily's compilation of links
IN PERSON EVENTS
Q&A with co-star László Szabó following 8:20 show on Friday, January 9 (opening night).

Critic and author Richard Brody
(Everything Is Cinema:
The Working Life of Jean-Luc Godard)
will introduce the 8:20 show
on Friday, January 16.

EVERYTHING IS CINEMA:
THE WORKING LIFE OF JEAN-LUC GODARD
by New Yorker writer Richard Brody
is for sale at concessions
during the run of MADE IN U.S.A.

New MADE IN U.S.A. posters, designed by Japanese illustrator Keiko Kimura, on sale exclusively at Film Forum during run of film.
DONALD WESTLAKE (1933-2008)
Donald E. Westlake, who, under his pseudonym Richard Stark, wrote the source novel for Made in U.S.A., died this past New Year's Eve.
Posted by a at 3:27 PM No comments: 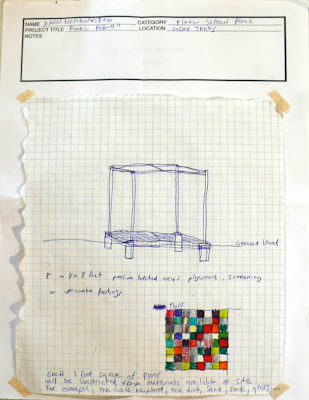 Call For Submissions: Visionary Drawings
We would like you to submit a drawing that reflects one of a number of categories to be collected under the theme, Visionary Drawings. The collection will be compiled into a book format that will be presented in an upcoming museum exhibition. Drawings can be made in any medium, and should convey a dwelling/structure/architectural concept.

Questions to consider
What is the function, who will use it?
Where do these ideas originate –an historic context, a material, a need?

Object
The project will seek to be as inclusive as possible, to represent a multiplicity in concept and vision, fantasy and innovation. The book will initially be situated for display adjacent to an architectural incursion into a museum, yet it will function as an independent, portable archive. Drawing is of primary interest, and can include notation or diagram as long as the format is maintained.

Format
Please use the form below (visTable.pdf) for your drawing: Print the file with the information table onto 8½”x11” paper, make or print your drawing onto the paper with the table on the top of the page. Fill in the table by hand. Scan and return your drawing by email as a jpg attachment (300 dpi) by January 15, 2009. (m49@earthlink.net).

Exhibition
Visionary Architecture will concentrate on un-built (impossible or speculative) structures that exist on paper. This project begins with an invitation to a wide range of participants, including artist, designers and architects of renown, as well as those presenting ideas for the first time. The book will reveal an array of works that convey alternatives, byproducts, expansions or critiques of one’s environment. The book will be presented in conjunction with the Matt Bua exhibition, Cribs to Cribbage, which will begin at Kidspace,Mass MOCA in March 2009 and expand throughout the year. The book, together with the exhibition, will highlight many visions that exist outside of established channels of production, and conventions of design.

A small personal library of books dealing with hand-crafted, alternative, sustainable architecture will also be on display, available for visitors to read during the exhibition. The publication, Visionary Architecture, is to be funded by the Joan Mitchell Foundation and pending additional support. 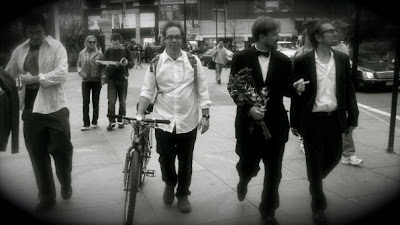 Congratulations!
Last happy day photographed with my Red GT Backwoods Bike had a dent on the bottom tube right. It was stolen at 13th and Broadway in broad daylight with tons of traffic locked with cable lock. (Bad Idea) - New idea start Bikefinders.com watch out for uhaul vans without windows. Anybody sees the bike 100$ reward.
Posted by a at 10:30 AM 1 comment: 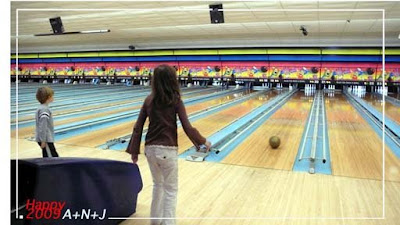