Net Aesthetics 2.0, The Long of It

There was surprisingly little conversation about how quickly technology and the Internet changes at last Friday’s Net Aesthetics 2.0 panel discussion at the New Museum, a topic that permeated its first incarnation in 2006, and presumably created a need to revisit the subject only two years later. Held in conjunction with EAI, the original panel was moderated by Rhizome’s executive director Lauren Cornell, and included curators Michael Connor and Caitlin Jones, as well as artists Wolfgang Staehle, Michael Bell-Smith, Marisa Olson, and Cory Arcangel. Notably, with the exception of Lauren Cornell, none of these panelists were in attendance for the second round of this discussion, most of them at different parts of the globe for other professional engagements.

To be honest, I can’t say I was overly impressed with the new incarnation of this panel, and certainly, if one is to judge by the number of people who stayed through the whole event, I wasn’t the only one who felt that way. Moderated by curator, author, and Rhizome staff writer Ed Halter with artists Petra Cortright, Jennifer and Kevin McCoy, Tom Moody, Tim Whidden representing the collective MTAA, and Damon Zucconi, the presentations and subsequent conversation were often littered with the use of net specific terms only those in the community were likely to understand, and therefore failed to engage many in the audience. I suspect part of the underlying issue here is that so much has changed over the last two years the discussion would really benefit from being narrowed; a three part series discussing surf clubs, hacking versus defaults, and protocol, as separate issues certainly would have solved a few problems.

I’m not going to bother discussing the failures of the conversation at any length because it won’t be of use to anyone and will give me a headache. To briefly summarize the less successful aspects of the evening however, both Damon Zucconi and Petra Cortright spoke poorly about their work, Kevin and Jennifer McCoy’s only connection to net art with regards to their practice is that they pulled a document off the Smoking Gun to make their piece Vice Presidential Downtime Requirements – at one point Jennifer McCoy bizarrely suggested the net wasn’t the right medium to make political art, and Tim Whidden asked the younger artists why they didn’t get that the Internet was a dead end, only to later admit that he wasn’t familiar enough with their work to make that claim. That said, even if some of the panelists didn’t do enough homework, more than a few worth while points of departure from Net Aesthetic 2.0’s first incarnation came up. As a result, I’ve provided a summation of these points after the jump, with the disclaimer that this is not meant to be seen as a comprehensive document on the issues raised, but a distillation of issues artists felt were important in 2006, and 2008. Notably there was a lot more agreement amongst the 2006 panel than there was last week.

Artistic Rationale for working on the web

The web is about communication

Is it art? How can we tell?

The Sublime, Beauty and Emotions on the Net

Net Art in the Gallery

The Wisdom of Crowds.

from TIME OUT NEW YORK via ART FAG CITY LINKS

Rhizome is out to make new media seem less scary.

When I recently asked an older artist if I could send her a Web link to a review of her work, she replied “Internet? I don’t even have an e-mail address!” Many artists are averse to technology and wouldn’t know packet switching from a pack mule. Lauren Cornell, adjunct curator at the New Museum of Contemporary Art and director of Rhizome, a new-media organization affiliated with the museum, is working to demystify the Internet for tech-shy artists and audiences.

In response to artists’ changing practices, Rhizome has paved the way in recent years for an expansion of the definition of media art, foremost through the revision of the group’s mission statement in 2005, which now states that Rhizome is “dedicated to the creation, presentation, preservation, and critique of emerging artistic practices that engage technology.” Says Cornell, a former TONY contributor, “We realized that there is no exclusive monolithic community working with the Internet; it has permeated our lives in virtually every way. We also wanted to be more inclusive of artists working with the idea of the Internet, and not just the platform itself.”

And it is true that an increasing amount of work in galleries and museums engages the subject of the digital world if not the technology itself. For instance, Trevor Paglen, whose work has been featured at Bellwether Gallery as well as in events organized by Rhizome, collects symbols of military culture, including patches; much of his oeuvre is about the exchange of information in government special operations, and is based in part on records available over the Web. Another artist group highlighted in the New Museum’s programming is the collective Paper Rad, which produces digital animations as well as comics and performances related to digital themes.

Since its founding by Mark Tribe in 1996, Rhizome has grown into a full-fledged nonprofit with nine staff members, including curators, writers and interns. The organization offers an extensive website with an editorial section reviewing shows, along with relevant news stories, opportunities for artists to submit portfolios, an online community board and a rigorous program of exhibitions and events at the New Museum, which provides an actual physical space for new-media curatorial endeavors. Upcoming special events such as “Net Aesthetics 2.0,” a panel discussion with prominent artists and critics on the state of technology in contemporary art, as well as monthly happenings through the New Silent Series, organized by Cornell, are excellent examples of the new face of Rhizome.

Cornell, 30, assumed the directorship of Rhizome in 2005, after working as a curator and a writer for several years. At the time she was uncertain whether to stay in the art world. Law school beckoned, but a friend, artist Paul Chan, convinced her of the important role that the arts play in society.

Rhizome began as a listserv for the small community then working at the intersection of art and the Web. At that time, the relationship between the two was quite different from what it is now. Cornell says the initial feeling among creatives was of “totally exploring the possibilities and limits of a new medium. Today the attitude has shifted to enthusiasm mixed with a healthy amount of skepticism.” She says there is an increasing number of artists who not only utilize the latest in digital technology but also critically examine the effect of the realm of ones and zeroes on art, society and politics. “At Rhizome we try to position ourselves to reflect this new attitude and the constantly evolving relationship between the arts and new forms of media,” Cornell explains.

Artist Michael Bell-Smith, who has worked with Cornell and shows at Foxy Production, posits that this trend away from tech geekiness is a good thing for art. “Before, Internet art was much more compartmentalized and was more easily ignored because it was steeped in its own technology,” he explains. “Rhizome has been instrumental in contextualizing new-media work and pairing it with other things in a way that levels the playing field and makes media work much more accessible.” Bell-Smith lauds Cornell for her appreciation and understanding of the art-world establishment coupled with her receptivity to new work. He adds that her ability in her work at Rhizome to draw parallels between old and new trends helps people to see the connections.

And you won’t have to have majored in CompSci to appreciate any of it.

Marcin Ramocki's thoughts on surf clubs a must read! From recent conference in Nova Scotia

"Surfing Clubs: organized notes and comments"
Posted by a at 8:28 AM No comments: 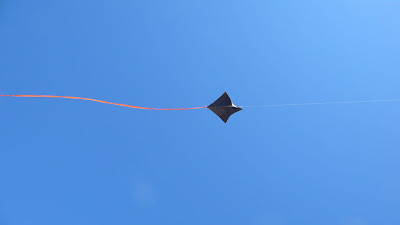 5/27/08 Bit Kite, Surfer Beach, Far Rockaway, Brooklyn
Kite invented 1982-83 on Block Island
Back in the Sky after a prolonged hibernation. Kite flown by Shabnam Fulmer winds gusting over 15 mph.
Posted by a at 5:59 PM No comments:

Blue is the hill,
green the sky,
ochre the child
that plays with you.

Yellow is god
and red her lamb
that dies a purple noon
before the light goes out.

Free Fall From Cormorant
Isle
By John Ree/ aka J. Zvi Namenwirth
Posted by a at 11:23 AM No comments:

Things that are cracked 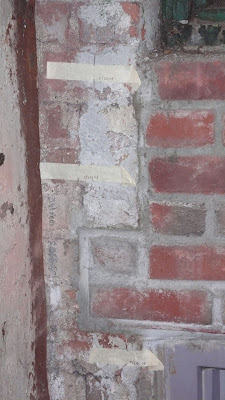 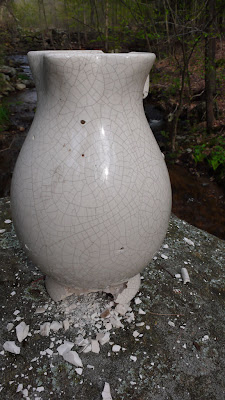 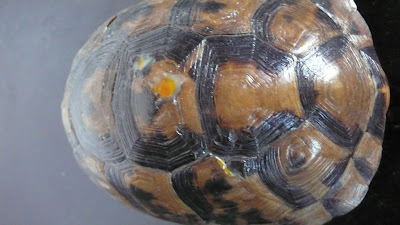 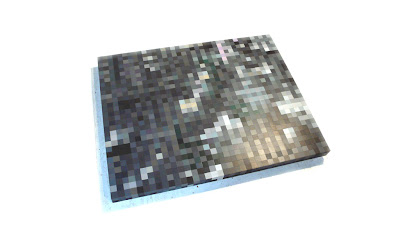 
View of Mccarren Park Williamsburg, the first Sculpture in a while. The re materialization of a google map blow-up. In a sense this gives the bitmap/pixels physical form in the real world.
I walk my dog Colin at least once every day here so it is an intimate realization of actual space. Also, included in the map is artMovingProjects and VertexList the blow-up destroys the specificity of the literal. As a sculpture this piece sits on the floor changing the bitmap field from the vertical plane to a horizontal one. While the earlier paintings dealt with political portraiture this work deals with a personal landscape.
Posted by a at 7:38 PM No comments:

Email ThisBlogThis!Share to TwitterShare to FacebookShare to Pinterest
Labels: sculpture 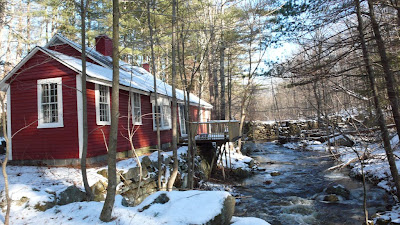 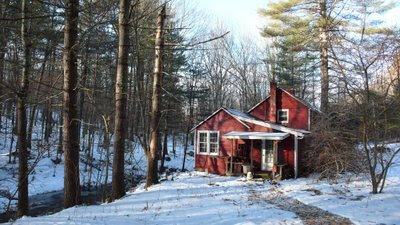 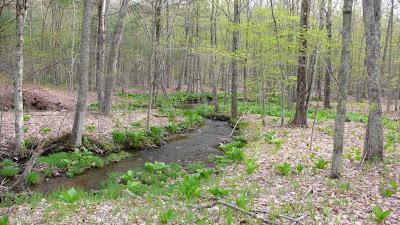 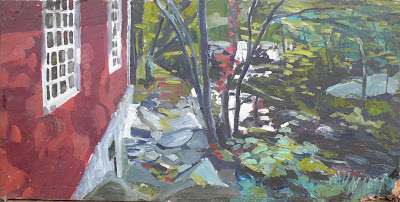 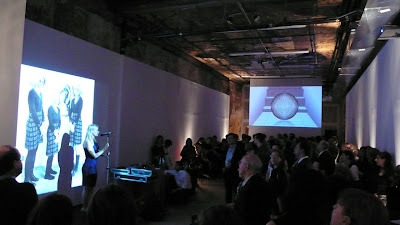 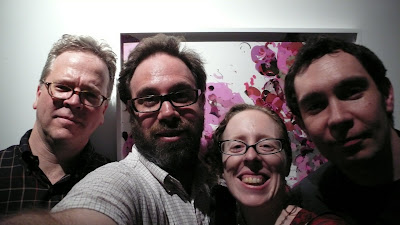 Bloggers: Tom Moody, Me, Paddy Johnson, and Marcin Ramocki
If you have not been by the new location for Participant check it out it has a nice vibe.
More photos at AFC 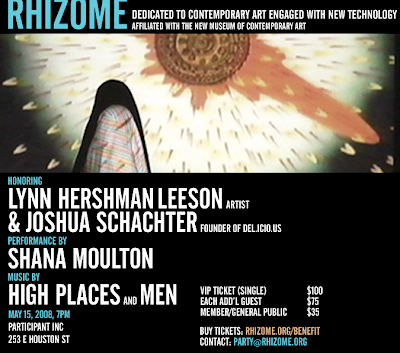 More from Block Island and Willington 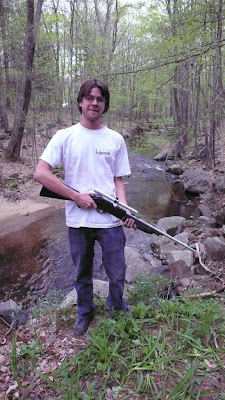 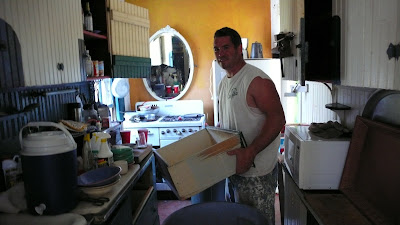 David - this guy is great a filling dumpsters 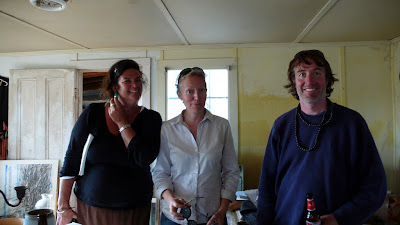 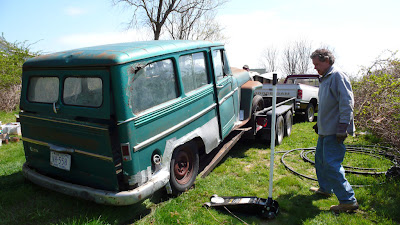 Scott Fowler taking the old willie's off the Island 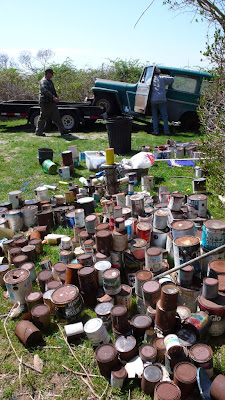 Cynthia had some paint stored away.