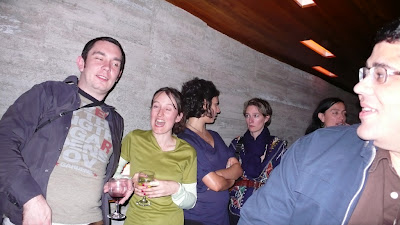 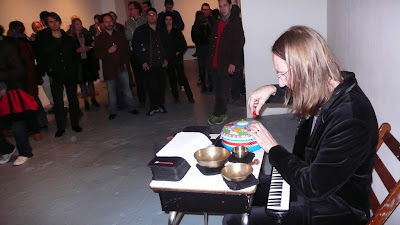 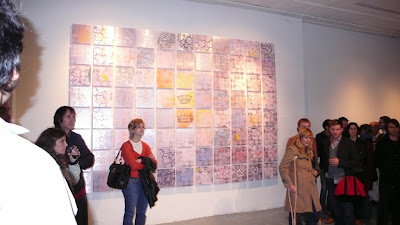 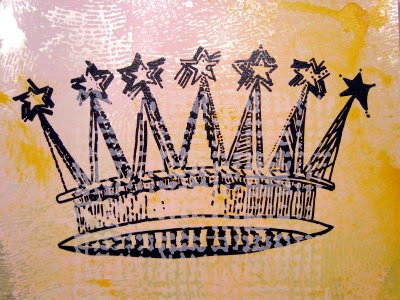 
VertexList space has the pleasure to present “Selling The Sound of My Voice”, a mixed media collaboration by visual artist Brice Brown and composer Alan Shockley.

A reception will take place on Friday, October 12th 2007 from 7pm - 10pm, with the artists in attendance.
The exhibition will be on display until Sunday, November 18th, 2007.

"Selling The Sound of My Voice" is a complex, interactive installation created by visual artist Brice Brown and composer Alan Shockley. Attempting to expose the fluidity in the relationship between sight and sound, Brown and Shockley have devised a system of analogous symbols and sounds that they used throughout the three pieces on view. Though these symbols appear to be only decorative (and indeed use decoration as a way to bait the viewer) nothing is superfluous, for every visual mark finds a direct correlation in sound. The exhibition centers on a large wall-mounted piece consisting of 88 twelve-inch square aluminum panels, and a looped 30-minute electro-acoustic score. Each one of the 88 panels corresponds to a family of sounds heard in the score. What sets this piece in motion is the sale of the individual panels, because at the point of purchase, each tile must be immediately removed from the wall, while the sounds it represents must also be removed from the score. In this way, as suggested by the exhibition’s title, the financial success of the show will continually reduce the work so that it eventually becomes non-existent. Also on view is a touch screen version of the larger main pieces. With this piece, the viewer is able to select any combination of tiles-sounds by touching the screen. The selected sounds will be heard on a pair of headphones, and the tiles will be projected onto the wall. Here the viewer is able to exert total control over the piece. Two limited edition prints with accompanying headphones are also on view, each one an example of combinations of the symbols and their corresponding sounds as selected by Brown and Shockley. For the opening, Shockley will perform live on a melodica, joining this live musical element to the many layers of the installation’s sound.

Brice Brown received his BA from Dartmouth College and his MFA from Pratt Institute. His exhibitions have been favorably reviewed in the New York Times, Art in America and The Village Voice, and his work is found in public collections including the Speed Art Museum, Louisville, KY and Dartmouth College, Hanover, NH. His work is included in theupcoming exhibitions, "Demoiselles Revisited" at Francis M. Naumann Fine Art, NYC, and "Cut Copy Fold" at Artist Image Resource in Pittsburgh, PA. In the past he has collaborated on limited editions with poet Denise Duhamel (for the DVD animation "Laiterie") and artist Trevor Winkfield (for the silkscreen portfolio "I Come In Search Of Walnuts"). As a writer and art critic, Brown is a regular contributor to The New York Sun newspaper and has written numerous exhibition catalogue essays. He also publishes and edits anannual arts journal called The Sienese Shredder. In September 2008, Brown will have a one-person exhibition at Francis M. Naumann Fine Art, NYC.

Alan Shockley holds degrees in both composition and in theory from the University of Georgia, and advanced degrees in composition from both The Ohio State University and Princeton University ( M.F.A., 2000; Ph.D., 2004). He has held residencies at the MacDowell Colony, the Atlantic Center for the Arts, the Virginia Center for the Arts, and the Centro Studi Ligure. Recent performances include "candlepin bowling deadwood" by the California EAR Unit and "cold springs branch, 10 p.m." by pianist Guy Livingston, which is available on the Wergo CD "Don't Panic." His orchestral work "the night copies me in all its stars" is available on ERM Media's summer 2005 CD release "Masterworks of the New Era, Vol. 6" recorded by the Kiev Philharmonic, and his "Type I error [111306-011107]" for two-channel tape was released in August 2007 on the Bohn Media CD, "Clairaudience." His other works can be found on CDs issued by the Princeton Alumni Council and Jack Straw Studios.

VertexList gallery hours are Friday, Saturday, Sunday 1pm - 6 pm, or by appointment.
We are located between Graham and Manhattan Avenues on Bayard St. For more info
please visit our website www.vertexlist.net or call 646 258 3792.

Special thanks to Steven Miyao and http://www.kasina.com/ for their ongoing support.