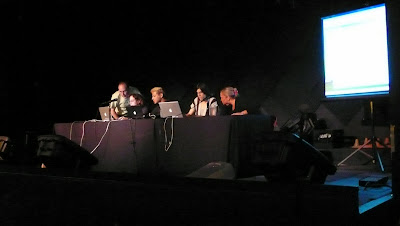 Reblog: Sousveillance culture
September 17th, 2007, 11:01 am
Marisa Olson set up and moderated a fantastic panel yesterday afternoon at Conflux about Souveillance Culture. The panel was sponsored by Rhizome and gathered Amy Alexander, Jill Magid and Hasan Elahi, 3 artists whose work engages surveillance and explore the cultural and political implications of sousveillance. The panel assumed that we live in a surveilled society but also in a culture that likes to show and tell. Our society has shifted from one that cherished its right to privacy to a society that promotes the idea "if you see something, say something."
For those of you who missed our Sousveillance panel at Conflux, Regine Debatty over at We Make Money Not Art gave it a thorough write-up. Read through for the full post.