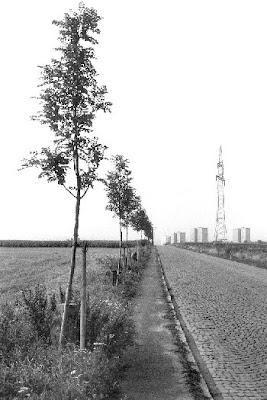 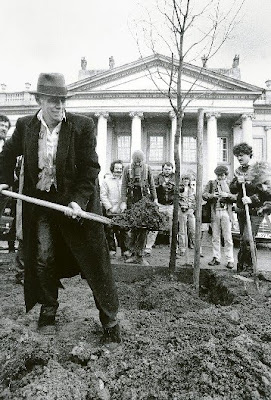 Both photos copyright: Dieter Schwerdtle Fotografie. The bottom photo shows Beuys planting the fist of the 7000 oaks in front of the Fridericianum in Kassell, 1982

I believe that planting these oaks is necessary not only in biospheric terms, that is to say, in the context of matter and ecology, but in that it will raise ecological consciousness-raise it increasingly, in the course of the years to come, because we shall never stop planting.1

Thus, 7000 Oaks is a sculpture referring to peoples' life, to their everyday work. That is my concept of art which I call the extended concept or art of the social sculpture.2

I wish to go more and more outside to be among the problems of nature and problems of human beings in their working places. This will be a regenerative activity; it will be a therapy for all of the problems we are standing before.... I wished to go completely outside and to make a symbolic start for my enterprise of regenerating the life of humankind within the body of society and to prepare a positive future in this context.

I think the tree is an element of regeneration which in itself is a concept of time. The oak is especially so because it is a slowly growing tree with a kind of really solid heartwood. It has always been a form of sculpture, a symbol for this planet.3

The planting of seven thousand oak trees is thus only a symbolic beginning. And such a symbolic beginning requires a marker, in this instance a basalt column. The intention of such a tree-planting event is to point up the transformation of all of life, of society, and of the whole ecological system...4

They are basalt columns that one can find in the craters of extinct volcanoes, where they become a prismatic, quasi-crystalline shape through a particular cooling process-which produces these shapes with five, six, seven, and eight corners. They could, and still can, be found lined up like perfect, beautiful organ pipes in the Eifel region. Today, most of them are protected. But we didn't have to have these particular splendid organ pipes, we just wanted a material with basalt characteristics from the environs of Kassel. So there we found basalt columns which are part crystalline, that is to say, they have sharp corners, but at the same time tend toward amorphousness. 5

My point with these seven thousand trees was that each would be a monument, consisting of a living part, the live tree, changing all the time, and a crystalline mass, maintaining its shape, size, and weight. This stone can be transformed only by taking from it, when a piece splinters off, say, never by growing. By placing these two objects side by side, the proportionality of the monument's two parts will never be the same.

So now we have six- and seven-year-old oaks, and the stone dominates them. In a few years' time, stone and tree will be in balance, and in twenty to thirty years' time we may see that gradually, the stone has become an adjunct at the foot of the oak or whatever tree it may be.6

Beuys's project 7000 Oaks was begun in 1982 at Documenta 7, the large international art exhibition in Kassel, Germany. His plan called for the planting of seven thousand trees, each paired with a columnar basalt stone approximately four feet high above ground, throughout the greater city of Kassel. With major support from Dia Art Foundation, the project was carried forward under the auspices of the Free International University (FIU) and took five years to complete, the last tree having been planted at the opening of Documenta 8 in 1987. Beuys intended the Kassel project to be the first stage in an ongoing scheme of tree planting to be extended throughout the world as part of a global mission to effect environmental and social change; locally, the action was a gesture towards urban renewal.

Beuys envisioned projects occurring throughout the world inspired by his 7000 Oaks. In conjunction with the Walker Art Center's exhibition of Beuys' multiples from the permanent collection, the Walker has undertaken a tree-planting project in the spirit of 7000 Oaks.

The Walker's three-part tree-planting project is being coordinated by independent curator Todd Bockley with support from the Visual Arts Department, as well as the Education Department's Teen Programs and Community Programs.

Email ThisBlogThis!Share to TwitterShare to FacebookShare to Pinterest
Labels: Trees 2010