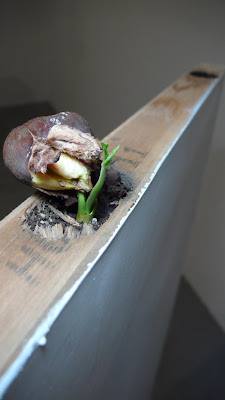 Some background on the plight of the chestnut in the United States. Seen here growing in a hollow-core door.

Cankers caused by the fungal infection cause the tree trunk to split.
Scientific classification
Kingdom: Fungi
Phylum: Ascomycota
Subphylum: Pezizomycotina
Class: Sordariomycetes
Order: Diaporthales
Family: Cryphonectriaceae
Genus: Cryphonectria
Species: parasitica
Binomial name
Cryphonectria parasitica
(Murrill) Barr
The chestnut blight fungus, Cryphonectria parasitica (formerly Endothia parasitica), virtually eliminated the once-widespread American chestnut tree.
The chestnut blight was accidentally introduced to North America around 1900-1908, either through imported chestnut lumber or through imported chestnut trees. In 1905, American mycologist William Murrill studied the disease, isolated and described the fungus responsible (which he named Diaporthe parasitica), and proved by inoculation into healthy plants that the fungus caused the disease.[1] By 1940, mature American chestnut trees were virtually wiped out by the disease.
In some places such as the Appalachian Mountains and others, it is estimated that one in every four hardwoods was an American Chestnut. Mature trees often grew straight and branch-free for 50 feet (sometimes up to one hundred feet), could grow to be 200 feet tall with a trunk diameter of 14 feet at a few feet above ground level. For three centuries most barns and homes east of the Mississippi were made from American Chestnut.[2]
The discovery of the Chestnut blight fungus on some Asian Chestnut trees planted on Long Island, New York was made public in 1904. Within 40 years the near-4 billion-strong American Chestnut population in Northern America was devastated[3] – only a few clumps of trees remained in California and the Pacific northwest. Due to disease, American Chestnut wood almost disappeared from the market for decades, although quantities of Chestnut wood can still be obtained as reclaimed lumber.[4] Today they only survive as living stumps, or "stools", with only a few growing enough shoots to produce seeds shortly before dying. This is just enough to preserve the genetic material used to engineer an American Chestnut tree with the minimal necessary genetic input from any of the disease-immune Asiatic species. Efforts started in the 1930s are still ongoing to repopulate the country with these trees, in Massachusetts[5] and many places elsewhere in the United States.[3]
The blight appears to have been introduced from either China or Japan. Japanese and some Chinese chestnut trees are resistant to the fungus: they may be infected, but the blight does not usually kill them.
Despite the devastation the blight caused to the American Chestnut tree, the root collar and root system of the tree are fairly resistant to the blight, so a large number of small American Chestnut trees still exist as shoots from existing root bases. However, the shoots are seldom able to grow enough to reproduce before the blight attacks them.[6]
The fungus is spread by an unknown agent, but it is local in range, so many American Chestnuts survive where there is no other tree within 10 km. Also, there are at least two pathogens which weaken the fungus (hypovirulence) and many trees survive that way.
Surviving chestnut trees are being bred for resistance to the blight, notably by The American Chestnut Foundation, which aims to reintroduce a blight-resistant American chestnut to its original forest range within the early decades of the 21st century.
A small stand of surviving American chestnuts was found in F. D. Roosevelt State Park near Warm Springs, Georgia on April 22, 2006 by Nathan Klaus of the Georgia Department of Natural Resources.[7]
Chestnut blight destroyed about 4 billion American Chestnut trees[3], and reduced the most important tree throughout the East Coast to insignificant presence. The American Chinquapin (Chinkapin) chesnut trees are also very susceptible to Chestnut blight. The European and West Asian Chestnuts are susceptible, but less so than the American species. The resistant species (particularly Japanese Chestnut and Chinese Chestnut but also Seguin's Chestnut and Henry's Chestnut) have been used in breeding programs in the US to create hybrids with the American Chestnut that are also disease-resistant.[8]
Posted by a at 5:12 PM

Email ThisBlogThis!Share to TwitterShare to FacebookShare to Pinterest
Labels: Trees 2010