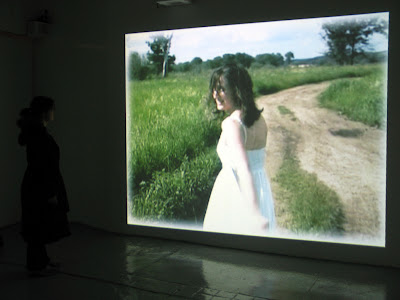 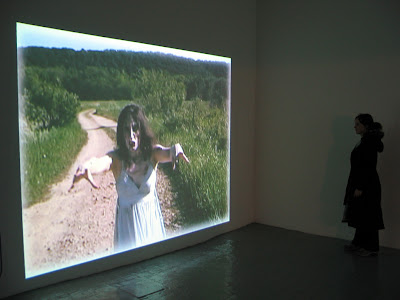 We invite you to aMP artMovingProjects 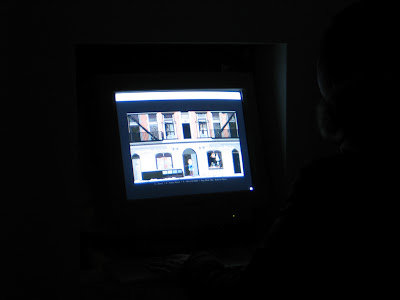 My new body of work, Horror Cycle concentrates on the manufacturing of fear as entertainment that the horror film genre accomplishes. Unlike contemporary horror films, this work offers no extreme violence, little gore, no character development, and zero plot. These are stripped away in order to highlight the protagonists and their dilemmas.

The zombie, among other "undead" monsters, is the definitive horror creature thanks to its abject existence - robbed of identity, neither fully dead nor fully alive, neither clever nor resourceful, and driven only by its hunger for flesh. The central dilemma of the sub-genre of zombie films is that the survivor must outrun and therefore outlive the zombie. Victims turn into zombies, therefore to be caught and find oneself zombified is the most horrifying resolution. The sub-genre plots survivors on the move and ever vigilant, or temporarily holed-up and sleeping with one eye open. It is impossibly difficult to escape zombies, despite the fact that with little exception they move agonizingly slowly. Although it should be easy to escape them, the earliest victims are those paralyzed by their own fear.

Zombie Loop is a two-channel video in which projections on two opposing walls position the viewer in the center of a visual loop, wherein a gruesome zombie endlessly pursues a running survivor. On screen, I "play" both zombie and survivor. The video tracks are the same length. The zombie, prepared with professional make-up and filmed from the front stumbles, expressionless but threatening, towards its goal of catching the survivor. The survivor runs, occasionally glancing over her shoulder and exclaiming in fear as she becomes aware of the imminent danger. In the scenarios, filmed on a country road in Avoca, Wisconsin, it is obvious that the zombie and the survivor are somehow the same, referencing the genre's implied life-cycle where the living become the undead and the undead want only to consume the living. The tracks are projected simultaneously and the sequences looped continuously.

Locating the viewers physically between the two roles positions them as both the pursued just out of reach of danger, and the pursuer hungering for its prey.

Inspired by the graphics of Leisure-Suit-Larry (1987), AVERAGE SHOVELER (2004-05 Rhizome.org at The New Museum commission) is an online game challenging the boundaries between photo, paintings and short movie. The location is the NYC’s East Village. It’s snowing, and you have to keep your way cleaned. Each flake of snow contains an image taken live from Yahoo’s news feed while people tell you top stories in cartoon bubble gathered from the same sources. All this is set to music composed by Gabriel Yared, award-winning composer of scores for movies such as The English Patient and Cold Mountain.