Hand of Man 4 eyes of god 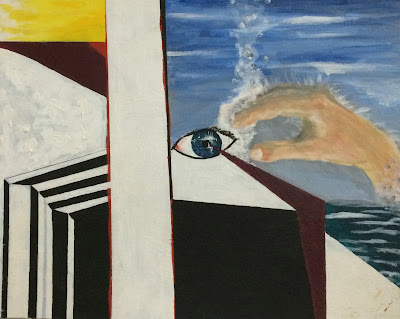 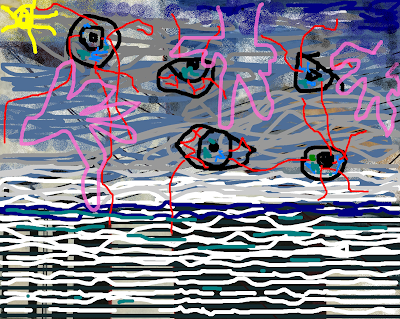 This painting above is from 1977 the second painting I made  without any instruction from the Art teacher at Salisbury School. His name was Mr. Brown and at this time I was 17 years old. I remember that the art room was always empty so I could go there to find some peace from this all boys school that was a constant source of stress and torment to me. In the painting op art which was technically and conceptually also very escapist is merged with the ocean which is pushed to the side and my eye has been separated from my body by my own hand. At the time I was an injured wrestler. I was on a wrestling scholarship so I was feeling very guilty about not being able to earn my way. I had time in the afternoons when i could not practice with the team and had nothing to do. With a ripped sternum there was little that could be done. Further my science teacher felt that i lacked the organizational skills to be a scientist so all that I felt I could do was be an artist. They had a test at the time that tells you after answering hours worth of questions what one should pursue as a career. There was no profession on this test labeled artist or painter, the closest category was interior decorator. The second image I made yesterday. It was made in mac paint taking the earlier effort and opening it up using a lifetime of art making experience. It is a mixed media. It's exists here on the screen it has no materiality it can not be bought or sold. It belongs to everyone and can be possessed by no one.
Posted by a at 9:22 AM