Collapse of Culture in America (part 3) 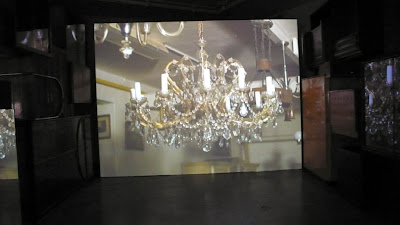 5. Jan Mancuska : Andrew Kreps
This show had all the elements of a great show, but I not sure if it all added up to something or not. The variables included over the top installation, building out of screen with sheet rock, lots of super cool vintage collectible furniture stacked to make walls to the ceiling, video that was non-narrative and searching, vitrines filled with etched glass and ceramic, at huge production cost. This experience was of such large ambition that it made me feel lost, somewhat like going somewhere with the right address but in the wrong boro, and having a friend tell you that they are there and you are there but you can't see each other. 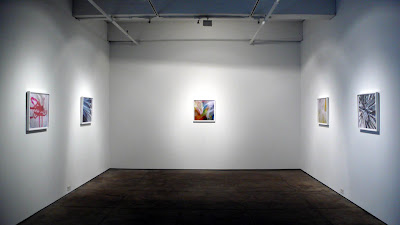 5. Meredith Allen : Edward Thorp
Another great show. In these photographs of trash, we find a symptom of our collapse.
Meredith using a medium that for the most part I have become bored with, touches on what
is destroying and what holds together society. This being our need to shop and buy beyond our needs and means. What is so amazing about these pictures is not what they represent but what they contain. (they remind me of the early work of Rachel Harrison, pictures of people walking by bags of garbage on the street). Here I think about presents made in china that will be on the street in a years time. I have talked about emotional content: an expression of Bruce Lee......
When I look at one of Allen's pictures it reminds me of the feeling I get from re-reading or looking at an illustration of a creepy scenerio in an old childrens book from when I was 4. What little hair left stands, and waves of feeling rush through my entire body:) In this case it is what covers the surface that delivers depth. Thank You Meredith. Her Partner Carol Saft is also good at navigating rough seas. 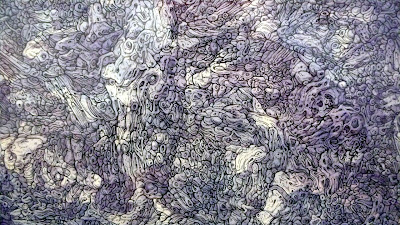 This is one of the best shows I have seen in a while and it proves that while culture collapses
aspects of it can expand. In this work lie the ruins of civilizations. The bones and artifacts left behind a species in the process of self-destruction. Cheers Christian!

This show is great! 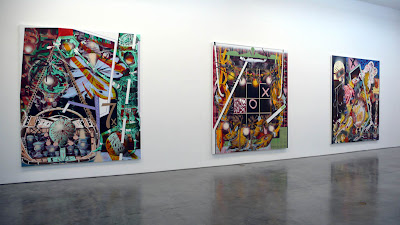 3. Lari Pittman at Gladstone Gallery: This guy seems to have taken Richard Princes place at Gladstone he influences a lot of young(er) painters namely my buddies Jay Davis, Emelio Perez, and Dan Kopp and others. Although they seem to be going for the thin gestural paint that is so now- anyway they Rock. I remember Carl Ostendarp once telling me you are only as good as those you influence.
So does Lari in this new show, all the paintings are consistently complex, tight and packed to the max with imagery that reveals itself slowly. So slowly in fact, that I did not have enough time to really give to it. The layering of form, use of line, and all that formal stuff was pretty incredible. 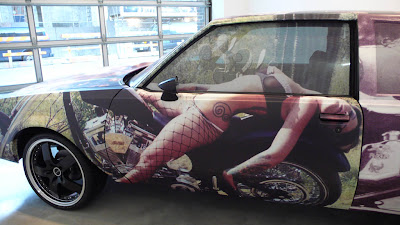 2. Richard Prince at Gagosian: This show lacks any of the wit Richard is know for. He is looking at Picasso and trying to redo him, but suffers from making the same painting over and over again. Does he think if he makes it big, and slings a brush around covering photo-shopped imagery of Richard Kern (who at this point is a much better artist) he is going to impress. Even the car in the window lacked the edge that Prince normally serves up. I think if this artist can not find any conceptual bite he should stop cranking out bad art, or he is going to devalue everything he has done up to this point. He should be looking at Duchamp more. Interesting expressionistic thinly painted canvases are back in fashion reminding me of neo-expressionism that preceded the last crash of the art market. Probably a symptom of a fast way to make a painting and a buck.

Another of my favs who has dropped the ball. 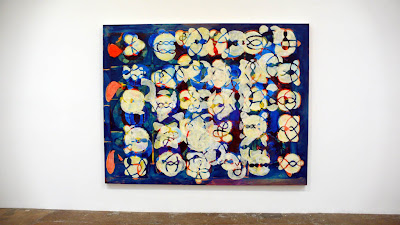 1. This first show was so bad I felt sorry for the artist, and am totaly blocking out his name,
but remember it was at Mathew Marks- oh yeah Terry Winters. What the hell happened to him? When I was in grad school he was the shit! That guy painted better than all the rest of them including Julian. His painting was fluid, they made themselves, worlds of all the stuff that existed at the beginning of the world. They seduced and sucked the viewer into their delicious realness and abstraction. They moved and danced. Nothing seemed contrived- they came from the earth and everyone in art school was trying to match him. Sam Reveles came close. The work at Marks lacked every quality of the earlier work except the oil paint and scale. Now the color seemed artificial and the composition static. This imagery rejects the grid template Terry imposes on it. What a disaster.

As I am opening up artMovingProjects with John Giglio and Paul Slocum in the New Media Project Space (N.M.P.S.) on Dec. 12th and presenting my own work "Made in U.S.A. at VertexList
on the 13th, so I am going to take the advice I gave to one of my very favorite artists Tom Moody and cool it on the criticism for the duration which is Febuary.
Posted by a at 9:48 AM

Hi Aron - it's good to read that you like the show - thanks! Best, cs