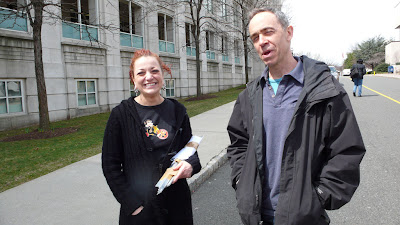 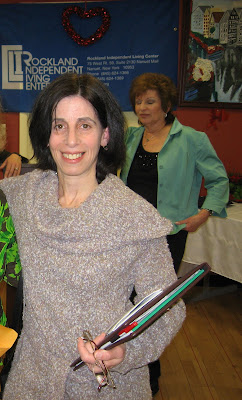 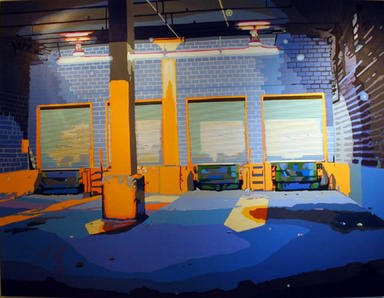 My largest painting "The Loading Dock" adopted by Miriam Cotto has been abandoned at The Rockland Independent Living Center. I was just called by Audrey Rosenfield President of the Board that they were going to put it out on the street. From what I understand the Center was left with this painting and was converting space into offices so they did not have place for it. Without Audrey's concern it likely would have been destroyed.

I talked to Adam Simon he said, "this is the worst thing that has happened"

This painting was inspired by the conclusion of my art moving practice, both as performance and work. The loading dock is an archetypical destination for all material possessions that have some value but no place in the world. In depicting the painting, (a facade of three closed gates), I see a portal to all that’s abandoned. It is like the mystery curtains in the game show, “The Price is Right”. The painting was made by projecting a digital photograph, taken of a dock deep underground in the far reaches of industrial Queens, onto canvas. At the time I conceived and executed the piece, I was looking at the work of Lisa Ruyter, an artist, whose studio was across the hallway, and thinking about the epic kiosk pieces by Devon Dikeou made in the early 90’s. Some time was spent driving around the city , in a truck with Matt Bua and Eric Heist, and a few other artists who made this a living. My recent paintings have further examined the implications of digital representation and content. This work was aquired by Miriam Cotto through the Fine Art Adoption Network. www.fineartadoption.net
Special Thanks to Adam Simon who is the founder of FAAN.
After looking at the Rockland Independent Living Centers website, I can see how it is a bad fit.
Thanks Adam Simon for swift action on this. Thanks to Audrey for contacting me "Loading Dock" will be moved to Seton Hall University and their permanent collection this was set up by Jeanne Brasile who is curating there. This probably will not be my last artMoving adventure, but taking it on the roof of the Pathfinder on the New Jersey Turnpike should prove interesting.
Posted by a at 4:06 PM