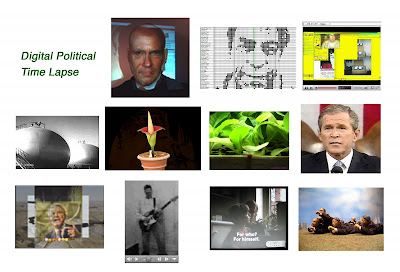 In many different approaches these artists address
our current political and physical environment.

“Media Center” 2003 is a single channel video shown on three
monitors. It is a meditation on the atrocities of the War in Iraq through
the use of images lifted off the internet. The soundtrack is a Tibetan
Buddhist chant that expresses both chaos and order.

Horror Cycle: The Bloom of the Triffid
video • 2006

animation • 2006
The Bloom of the Triffid is a one and a half minute animation loop. In August 2006 one of the world’s most rare and remarkable plants, a corpse flower, bloomed in Brooklyn’s Botanical Garden. Visitors came in droves, attracted to the flower's monstrousness. Notably, in Victorian times, ladies were not permitted to view such a bloom due to it’s phallic visual reference. A webcam was trained on the bloom which released a gruesome stench. Throughout the week-long bloom, I tracked the webcam, fanatically downloading images. The title and soundtrack reference "The Day of the Triffids", a novel written by John Wyndham in 1951 and made into a cult film in 1962. Triffids are fictional plants that are capable of various animal behaviors including attacking and killing humans.

Young tobacco plants open, close, and gently sway
in styrofoam cells. Fifteen hours become eighteen
seconds, only to become eternity. Excerpted from
a timelapse animation created during a month-long
exhibition at artMovingProjects in the spring of
2007.

"Hats"
"A big chunk of Slocum's screen space is taken up with a banal jpeg of
baseball hats on an armchair; the rest is a confused multiplicity of
windows opening and closing as well as overlapping and interrupting a guy
confessing on YouTube his unfaithfulness to his girlfriend." Tom Moody

(Part of) Horizon DVD 2004
This video is part of an installation in which a hundred toy businessmen crawl around in a model world with oil fields.
courtesy of :The Swiss Institute and Deitch Projects